There are hundreds of brands associated with eyewear, but few have a history which has stood the test of time. It is always interesting to see how a company has grown. Usually from humble origins and through tough economic climates. Quality prevails and here is the history of just 2 of the quality brands we stock at Allegro Optical.

No one is sure when this brand came to be, but at some point around 1881 an Englishman named Stanley Druiff set off for the U.S for the procurement of fountain pens, watches & spectacles to sell back in Britain. Only the sale of the spectacles succeeded! In fact, so successful was he, that he went on to found The Anglo-American School of Optics, an educational training service. The school offered personal tuition or lessons by correspondence. In this 1902 advertisement, (Now owned by the British College of Optometrists) it claims to be the ‘Oldest School of its kind in this country’, with the aim of turning out the ‘thorough refractionist’. 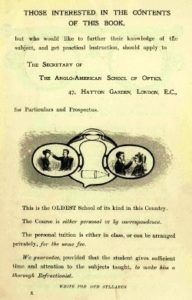 In 1947 the company was bought from Druiff’s descendants by optician Arthur Jenkin. With the commencement of the NHS in 1948 demand for frames increased dramatically. Imports from the U.S ceased during WW2 and resumed again in 1955. Jenkins’ son, Lawrence, left Britain in 1967 and headed for New York to learn the trade of spectacle making. He first worked as a dispenser for a high-class optical practice where he found himself amongst celebrity clients such as Paul Newman & Greta Garbo. Inspired by such clients, he went on to do some freelance design. Ultimately backed by American money, manufactured frames in volume for the first time. The business grew very successfully and by the 1980’s boasted a Park Avenue, New York practice and gained a huge following still popular today.

In 1926 Philip Oliver Goldsmith was a salesman for the large optical firm Raphael’s Ltd. He started hand-making spectacles at premises in London and established his own company to sell them at 4 guineas a pair. Goldsmith developed the first flesh coloured frame in an aim to make specs more unobtrusive.

In 1936 his son Charles joined the company and it was he who recognized their true fashion potential. Ornamental frames were made to coordinate with clothing and featured jewels and metal inserts.

During World War Two, Oliver Goldsmith was seconded by the government to make prescription glasses for the armed forces. ‘My grandfather said the most distressing aspect of work at the time was getting the “dead list” who no longer needed spectacles made for them,’ Oliver Goldsmith recalled.

The firm still produced glasses, but form was not as important as function. The gas mask spectacle was in great demand at the time – with ultra-thin temples and small diameter lenses.

Two years after the war finished, Oliver (Philip) Goldsmith died suddenly. He had kept a health condition secret from his family for some time. His son, Charles Goldsmith, who had worked at the company since the age of 16, assumed the name Oliver when he took over the business. 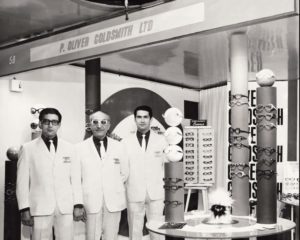 After his father’s passing, the company sold sunglasses to high-class establishments such as Harrod’s. He began advertising in British magazines including Tatler and Harper’s Bazaar. Celebrity endorsements helped their fame and it is known that before marrying, Prince Charles and Lady Diana Spencer commissioned spectacles from them to match Lady Diana’s dresses.

We have a wide selection of Anglo American and Oliver Goldsmith frames here at Allegro Optical, so why not call in and try some on? We’re sure you’ll love them!