No more migraines and a colourful future 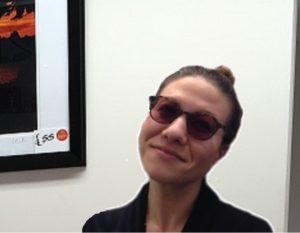 Thanks to colour Migraines are now a thing of the past

Music Teacher Julie Walker has had problems with glare for many years, which is often accompanied by severe headaches. Julie struggles daily as her severe photophobia often leads to migraines.  She had even taken to wearing prescription sunglasses for most of the day, even when indoors. However, this was getting in the way of her job. Julie’s employers, whilst sympathetic, encouraged her to remove her sunglasses. Especially when teaching and as a result Julies symptoms became worse, resulting in increased absences from work.

For many migraine sufferers just looking at certain visual patterns can trigger a severe headache. Stripes or polka dots, in particular, can induce an attack. A migraine usually includes symptoms such as a painful headache, sensitivity to light or sound,  flashing lights, olfactory sensitivity, nausea and/or vomiting.

Julie came to Allegro Optical on the recommendation of a musician friend who had visited us a few months earlier. We conducted a thorough eye examination and an OCT scan (Optical coherence tomography). We found that Julie had a very minor hyperopic prescription, with an add of +1. 75 but nothing else of any significance was detected. Julie who plays the guitar, flugelhorn and trumpet noticed that her headaches were also worse following a practice session. But she always played wearing her glasses and her refractive error had changed little since her last prescription. So this seemed unlikely to be the cause of the problem.

As the first course of action, we referred Julie to her GP for further investigation in case there were any other causes of her migraines. A few months later a very frustrated Julie returned as nothing had been found to be causing her headaches.  By this time she had more or less stopped playing. Julie was very distressed and desperately wanted to find a solution so we decided to carry out some more investigations.

There is some evidence from visual psychophysics studies which suggest that when a music stave has thick lines, perceptual distortions are likely to affect the clarity of the score. In some cases, this seems to induce a certain amount of visual stress. During some clinical studies, there appears to be a tendency for individuals with high pattern glare scores to read the scores with thick lines relatively slowly. Possibly suggesting that perceptual distortions can impair sight-reading because of the pattern from the lines of the stave. During the study using thinner lines increased sight reading accuracy and speed⬲. For this reason, we decided to conduct a colorimetry assessment using the pattern glare templates.*

In 1984 Wilkins proposed that the distortions arise in the visual cortex of the brain. Individuals with migraine are particularly susceptible to this stimulus, perhaps because migraine is associated with cortical hyperexcitability. 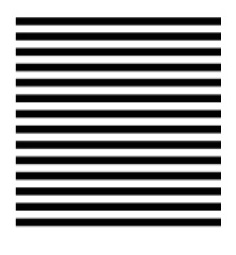 Many people find that a pattern like the one to the left is uncomfortable to view. Often experiencing eye strain, headaches and visual perceptual distortions. The reason for these symptoms is thought to be cortical hyperexcitability. Patterns such as this causes overstimulation of a hyperexcitable visual cortex and produces the above symptoms.

Coloured filters have been found to reduce the excitation of the visual cortex. Specific colours can in some cases reduce the stimulation of localised areas of hyperexcitability because neurons have different spectral sensitivities.

If cortical hyperexcitability explains the benefit from coloured filters for people with reading difficulties, then coloured filters should help other disorders. There are several disorders of the central nervous system which involve vision and in which the visual cortex may become hyperexcitable. These conditions include photosensitive epilepsy, head injury, multiple sclerosis and migraine.

Migraine can have many triggers, and clearly, precision tinted lenses (PTLs) would not be expected to help someone whose migraines were caused, for example, solely by chocolate or red wine. But Julie knew that her migraines often followed a rehearsal.  She also showed a consistent response to testing with the Intuitive Colorimeter (left). As a result, we were able to prescribe a pair of prescription PTLs and Julie now wears these spectacles for work and when playing. Thankfully her employers are now allowing to wear her spectacles at work. 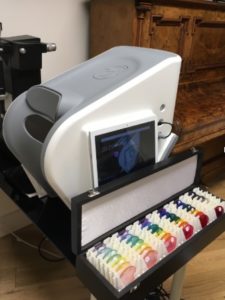 Three months later we repeated the colorimetry tests under three conditions; no tint, optimal tint, control tint. Again Julie showed a marked preference for the chosen hue and saturation of colour in the precision tinted lenses. When asked about her symptoms she reported a substantial decrease in the frequency of her headaches. She also reported a significant reduction in her reliance on medication since she began using her new glasses.  Julie said “So far, these glasses have made a big difference. Within seconds of putting them on, I could feel immediate relaxation in my eyes & my headaches have improved significantly. In addition to helping with my light sensitivity under the bright lights at work, they’ve helped with my sight reading and I can now enjoy my work and my music making.”

Migraine is one of the most common disorders of the central nervous, and even if only a small proportion of people with migraine can be helped with PTLs, then this may still represent a significant role for the optical practitioner. Most of these patients can be self-referred. With the appropriate information, patients can evaluate whether their migraines seem to have a visual trigger. Our optometrists ask all our patients about any headaches they experience, as this helps them determine if any are associated with visual stimuli (e.g. flickering lights, patterns, computers, fluorescent lighting, text). Lines of text can often form a striped pattern that may elicit pattern glare so the reading of text (or music) can be a visual stimulus that might trigger a migraine.

This case study has shown that some patients with visually precipitated migraine can be assessed with an Intuitive Colorimeter to determine whether PTLs will be helpful and to identify the appropriate colour. Many patients like Julie usually know which visual stimuli or tasks precipitate their migraines, and this is when the PTLs need to be worn. In addition to the use of PTLs to “avoid triggers”, some patients also find that PTLs help to reduce the severity of their symptoms during migraine episodes. 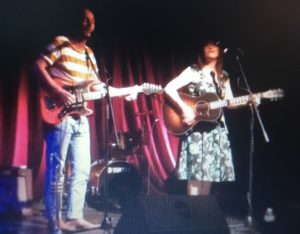 Optical practitioners can play an important role in helping patients, simply by recognising the signs of migraine and referring them to their GP for modern medical management. So, even for cases who can’t be helped visually, we can play a useful role by suggesting diagnosis and referring to the GP.

An important part of the Optical practitioners’ role as a primary eye care professional is the investigation of headaches. Any patient with migraine-like headaches requires a thorough eye examination, and many will require referral for further medical investigation and/or treatment. For some, there will be a visual component to the migraine, and in Julie’s case, we were able to treat the visual element of her symptoms. The Intuitive Colorimeter and PTLs are important tools for helping patients like Julie.

Why “The Musician’s Optician”?

At Allegro Optical we provide specialist consultations for all performers and musicians. Please feel free to visit our practices in Greenfield, in the heart of the beautiful Saddleworth countryside and Meltham located on the edge of the Peak District in Holmfirth. As musicians ourselves, we’re able to ask the right questions and interpret the answers to create truly unique spectacles. Using our combined optical and musical skills we are able to address and resolve the many visual problems encountered by conductors, musicians and performers.

Allegro Optical specialises in all aspects of musician’s vision correction to return and enhance musicians playing pleasure and performance experience.  The team has over 150 combined years’ experience in the optics and entertainment industry. Whether you want advice or a practical solution, just call Allegro Optical in Greenfield on 01457 353100  or Meltham on 01484 907090 or visit https://www.allegrooptical.co.uk

⬲. Brewster, D. (1832). On the undulations excited in the retina by the action of luminous points and lines. The London and Edinburgh Philosophical Magazine and Journal of Science, Volume 1(3), September; 169-174.