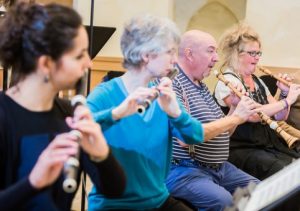 Edwina Smith has been playing the flute for most of her life, her ability as a musician is beyond question. However, over the last few years, Edwina has had a few problems when playing. With her vision beginning to deteriorate Edwina, who plays for Yorkshire Baroque Soloists had tried various solutions suggested by her regular optometrist, but none were completely satisfactory. Edwina, an established varifocal wearer found playing a flute in a semi-professional or professional situation in varifocals far from ideal. Due mainly to the very narrow field of view offered by varifocals at music stand distance. Edwina followed her optician’s suggestion of a using a single vision mid-distance pair of spectacle lenses. These gave her a clear view of the music but blurred the conductor. 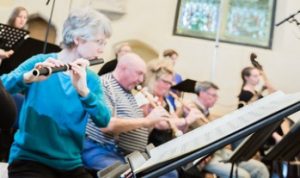 Having discussed her concerns with friends and family Edwina came to Allegro Optical on a friends recommendation. Edwina explained her problems to our experienced team of Optometrists and Dispensing Opticians.  They worked together to create a completely bespoke lens design. This improved Edwin’s vision at all her working distances when she plays. Both in rehearsals and when performing.

Now Edwina can see the music

When asked about her new spectacles Edwina said “On 7th November I did a series of concerts and workshops on period instruments in Birkenhead School. Playing a Vivaldi flute concerto and the last movement of Bach Brandenburg 5 to various different age groups, plus conducting a baroque woodwind session. It was a very long day but it all went fine. I felt comfortable looking up from my music when playing in the ensemble. Conducting was easier when I could see both the music and the players equally comfortably. When I did a baroque flute demonstration as part of a study session for the A level and GCSE students (in a large chapel), I was able to see the students in the audience easily without having to take my glasses off!

Last Saturday I played for a choral concert in Newcastle (JS and CPE Bach Magnificats), again on baroque flute. I’ve got so used to wearing the new glasses now that I didn’t worry too much about it.  I just tried to remain focused (in every way!) and didn’t misread anything. My vision of the conductor was better than for many years. It’s only now that I realise how fuzzy conductors have been for a long time! I thought that I might have trouble refocusing when looking down at the music again after looking at the conductor. But actually, I think that aspect is easier than it was when I was using single vision middle distance lenses.

In the past, I think when I looked at the conductor my eyes would try and focus even though it was fuzzy, so when I looked down at the music again they would have to readjust.  It’s a lot better than I ever thought it would be, I’m very happy.”

Musicians have a variety of different working distances and this can pose real problems to the more mature player. Many presenters and musicians also suffer from postural problems as a result of trying to compensate or adapt to deteriorating vision.

As musicians ourselves, at Allegro Optical we have a working understanding of the playing and seating positions of musicians. This allows us to resolve their vision problems in a different way.  A musician’s working and playing life can easily be extended by the visual improvements that this solution provides.

A great many musicians who experience focusing problems at different distances are completely unaware that there is a solution to these problems. Many optometrists and opticians do not fully understand the issues and either prescribe and dispense single vision lenses for the music stand, or varifocals which often exacerbate the problems due to the narrow corridor. At Allegro Optical we approach the problems from the musicians’ viewpoint and we have developed a range of lenses and dispensing techniques that give a wider and more comfortable field of view and greater depth of field.