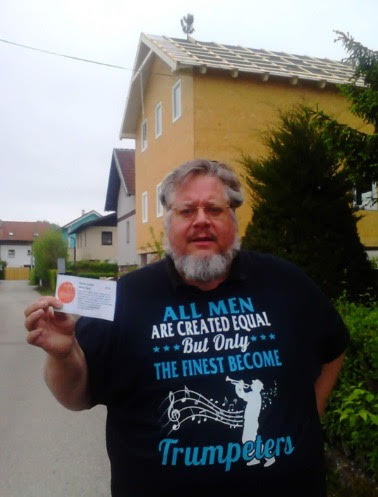 It was on the 25th March that we opened our new optician’s practice in Meltham. Diggle B brass band entertained our many visitors and we held a balloon race to help raise funds for the Macular Society.  Each of the balloons had a ticket attached to it asking the person who discovered the balloon to get in touch.  Little did we realise the distance some of these balloons would travel.

It was nearly a month later when we received a message from Viennese historian Elmar Eggerer Elmar saying that he had found the remains of one of our balloons entangled in his new roof. Elmar is well known for his comprehensive study of Mediaeval English Guilds and Craft Companies as well as being a sought-after trumpet player. Elmar is currently building his own house in Greifenstein, a town 24km north of Vienna.

Having just put the roof on the building, it is customary to put something like a small fir tree on top for the celebrations. These celebrations are traditional in both Germany and Austria and are called the “Topping Up” ceremony. The tree caught the remnants of the balloon, Elmar climbed up and recovered it – Ticket number 19.

Elmar’s latest appointment is as Principal Trumpet of the world-unique Vienna Klezmer Orchestra (www.klezmerorchester.at). He is married to opera singer Regina Schoerg who is currently in Shanghai appearing in a performance of Richard Strauss’ “Elektra” – the title role! Born in Austria, Regina studied at the Konservatorium der Stadt Wien before she joined the Landestheater in Linz. She has worked at the Vienna Volksoper and then moved on to the Vienna State Opera as a soloist. Internationally, Regina has performed key parts and leading roles at opera houses as far apart as Sydney and San Francisco, Berlin and Beijing, Toronto and Tokyo.